A couple of my favourite smoothie recipes:

A crazy concoction but incredibly tasty: this cool, slightly sweet, fresh tasting with just a hint of chilli heat. The ingredients list might look like a dog’s dinner but trust me, it’s the cat’s pyjamas.

This is my favorite breakfast at the moment. Simple, healthful and delicious. I make mine extra thick so it’s basically ice cream. Yum. 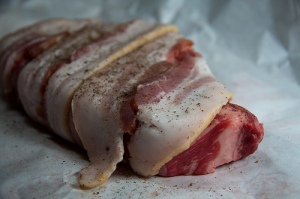 One of the things I like best about my Kindle (oh how the snobbish are fallen!) is the wealth of random, out-of-copyright books I can add for free. Being a food geek, I was drawn to Old Cookery Books and Ancient Cuisine by William Curew Hazlitt, a literature review, if you will, of old-school English cookery. The following recipe is from a 1736 cookbook, The Compleat Housewife. Like Hazlitt, I am awestruck enough to reproduce it in full. I assume this was a rare treat for well-to-do types, otherwise, our ancestors would have died of massive coronaries before they had time to begat.

To make a tureiner: Take a china pot or bowl, and fill it as follows: at the bottom lay some fresh butter; then put in three or four beef-steaks larded with bacon; then cut some veal-steaks from the leg; hack them, and wash them over with the yolk of an egg, and afterwards lay it over with forc’d-meat, and roll it up, and lay it in with young chickens, pigeons and rabbets, some in quarters, some in halves; sweet-breads, lamb-stones, cocks-combs, palates after they are boiled, peeled, and cut in slices; tongues, either hogs or calves, sliced and some larded with bacon; whole yolks of hard eggs, pistachia-nuts peeled, forced balls, some round, some like an olive, lemon sliced, some with the rind on, barberries and oysters: season all these with pepper, salt, nutmeg, and sweet-herbs, mix’d together after they are cut very small, and strew it on every thing as you put it in your pot: then put in a quart of gravy, and some putter on the top, and cover it close with a lid of puff-past, pretty thick. Eight hours will bake it.

This is a Shaun Hill (of The Glasshouse, Worcester) recipe, from The Crisis Cookbook. It is the easiest, most delicious chocolate cake I’ve encountered and since I don’t have luggage space to drag cookbooks around the globe I take the liberty of posting it here. For full recipe details buy the book!

I love peanut butter with a greedy, by-the-spoonful-out-of-the-jar passion, so when I spotted Lazy Day Peanut Noodle Salad on my favourite recipe site, 101cookbooks.com I got kind of over-excited.

I made the dressing using lime juice in place of rice wine vinegar, with plenty of red chili flakes, of course. Everything else was pretty much as you’d expect. Chopped all the veg, chucked the spaghetti on to boil, then added first the carrots, then a couple minutes later the pepper and chile poblano (roughly the size of an ordinary green pepper but with a mild chili kick), then a minute after that the spring onion and spinach. Couple more minutes on the boil, drained and tipped into a big bowl where I tossed it with the peanut dressing then chucked handfuls of sunflower seeds, salted peanuts and coriander in.

It didn’t come out looking anywhere near as elegant as the original version, and to my taste it should have been a bit more peanutty (the lime really cut the peanut-butteriness, so I might experiment with something else next time) but we scoffed the lot so thumbs up.

I’m on a bit of a local ingredient kick and bought jicama the other day. It’s a big, ugly lump of a root and I had to Google it to find out what the hell you’re supposed to do with it. Eat it raw, apparently. I have my doubts about eating raw anything you could use as a defensive weapon in the case of burglary but when in Rome… so I had a crack. The flavour is decent enough: slightly sweet in a rooty, parsnip-y kind of way. Unfortunately it bears plenty of textural resemblance to raw parsnip as well, which I can’t cope with. I stuck it in the fridge and waited for inspiration.

Roasting, frying and steaming all crossed my mind, but the oven here is a weird little creature I don’t understand and I instinctively felt jicama would be fry-resistant. Finally I decided to steam and mash it. Whacked it into the steamer and pootled off to check my email. Ten minutes later the rigid fruit was unscathed. Twenty more minutes and it was still raw carrot consistency. I refilled the steamer. Ten more, no joy. Boil it, perhaps? Just past 10PM, after half an hour at a brisk boil it dawned on me why Mexicans eat the damn stuff raw. It WON’T cook. Christ only knows what kind of super-cellulose it’s made of, but they should use it in fortifications. Bored of boiling, and hungry, I decided to stir-fry it with red onion, red pepper, spring onion, tomatillos (which, apart from making me think ‘fried green tomatoes’ every time I chuck them in the pan, are sublime) garlic and a tin of tuna. Plus the usual lashings of olive oil, balsamic vinegar, chili flakes, salt and freshly ground pepper. I drizzled the lot with fresh lime juice and ate it with corn tortillas. It was good, but more involved than I’d bargained for. If I’m going to fuck around in the kitchen for over an hour I want more to show for it than stir fry.