Lists are the complementary bread rolls of journalism: stuff trotted out to sate the reader when there is nothing of nutrional value on offer. A list that ranks mental illness as if it were a competition sport, however, aspires to more. It seeks to interpret experience, to tell us what or who is “depressed” or “depressing”, to help us judge the world according to arbitrary standards of normalcy. According to this list writers are among the professionals most susceptible to “mood disorders” and “Depression is not uncommon to those who are drawn to work in the arts”.

Depression is, I feel, the wrong word. Acute sensitivity is probably more accurate, and certainly less pejorative. You can’t be much of a writer, or artist, with a two-octave emotional range. The whole point of writing well is to look hard and fearlessly at life as it is, not as you, or the government, the PTA, Jesus, or the media wish it to be. Writers who aspire to something meaningful have to wade through shit while other people hold their noses; they have to turn over the slimy rocks no one else will touch. They have to let go of the protective fallacy of dogma. Insofar as possible, they must experience without judging.

This is harder than it sounds. It means letting go of the kneejerk “me” reactions (“I’m mad”, “I’m hurt”, “It’s not fair”) and developing a new relationship to life’s vagaries. It means rejecting platitude and prejudice; means seeking the grace to absorb injury and injustice in order to reach a deeper understanding of humanity. There is no shortcut to this kind of wisdom, and no quarter given. A writer has to be infinitely alert, quick to chose the path of most resistance. This is exhausting, and can be alienating. Writers get tired, as a result, and lonely, and – yes – it can be “depressing”. But it is wrong to make blanket assertions about writers and depression. Writers see the world in different shades. One, inevitably, is blue.

Yesterday, I huddled beside the espresso machine at work and watched plump snowflakes slather themselves across parked cars, fences, hoods, pushchairs, scaffolding and an abandoned bicycle. Thick and clotting like poured cream, it smoothed the glaciers creeping across pavements and drew lacy gloves over the trees’ naked fingers.

I step out prepared for impertinent cold to slap me and run away giggling. Impertinent was yesterday. A new beast wraps around my legs as if my jeans aren’t there and holds my hand like death. Five minutes later I fumble keys and wrestle the black steel portcullis. Each routine gesture has new significance. Muscles contract like tormented snails. If my stomach could hide behind my spine, it would. Nerves tremble at destiny. I am 60% water; I should freeze.

At minus 12 the condensed breath of the city is pinned, molecule by molecule, against the brittle milkblue sky. It is illusive-soft as a whorl of liquid nitrogen. Put your hand to it and flesh crackles as if in flame. We huddle in the cupped palms of this inhuman splendour. Twitch gluttonous eyes at the frosted parabola of a hill, the wink of an stalactite. Behind ice’s poor imitator, we burrow for warmth in slabs of chocolate cake, chase it in creamy coffee swirls. 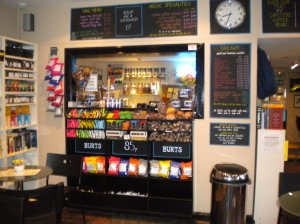