Hirsute masses camped around Washington, D.C.’s Reflecting Pool. Stormy-faced libbers incinerating lingerie. Stoic figures reeling under the barrage of fire hoses. And perhaps the most horrific, memorable image of all: stunned Kent State students staring at their compatriots’ bodies on a day that will live in infamy.

Somehow, between the so-called idealism of the ’60s and the hustle-bustle/every-person-for-himself world of the ’80s and ’90s, the word “protest” became just a little bit dirty.

Dirty like an apple cart-upsetting urchin, a useless nose-thumbing at the powers that be, the value of which – if any – is both marginal and decidedly historical.

After all, didn’t the protesters of the ’60s settle down, cut their hair, quit smoking dope and – on their way to becoming our parents – turn into the respectable, law-abiding citizens of today’s USA? That is evidence, we are led to believe, that they eventually recognized just how foolish they looked with their flowers and peace signs.

Implicit in this version of history is the idea that the problems which confronted America in the ’60s – racial inequality, an unjust war, sexual inequality and all the rest – have no present-day counterparts. A dangerous heresy that hints that mass protest is a social relic, irrelevant to our modern age.

The subtle message is that protesting is something of an anachronism. Sure, we still have problems – there are still some social injustices and minor governmental cock-ups – but nothing worthy of making a big, noisy, grubby traffic-halting fuss. Demonstrating – with all the accompanying banner waving, fist pumping and commerce interrupting – is hopelessly naïve and out-dated.

Or is that just what the government and media would like us to believe?

In the backlash of the anti-establishment ’60s, it must have become the Establishment’s top priority to stop any further social upheaval. With women and people of color demanding rights and nice middle-class children standing up to the government and demanding to know what right it had to go bombing a poor Asian country back into the Stone Age, it must have been an ulcer-inducing epoch for the denizens of power in Washington, D.C.

So, how to forestall the upheavals? Well, the easiest way was to convince the next generation that all their parents did was waste a lot of time and look a little silly in the process. Remind them of the peccadilloes, the disorganization, the selfishness, the stubborn idealism, remind them that those hippies were all just doped up to their eyeballs anyway.

Most of all, remind them how inefficient it all was, how messy and unnecessary. Imply, if you don’t actually come out and say it, that the government would have sorted out all the social ills a lot more quickly if officials hadn’t had to waste their time trying to keep well-meaning but daft protesters from wrecking political conventions or getting beaten up by racist rednecks.

Apparently, this approach has succeeded. When was the last time you saw a massive student rally? A serious political protest of any kind? Chances are, even if there was one, the media systemically ignored or belittled it. Remember the Million Man March? Recall that rather than discussing the social and ideological implications the media focused most of its attention on the rather silly post-march controversy over whether or not there were actually a million men, imputing that the whole thing was merely a bizarre ego-gratification exercise for Louis Farrakhan.

More recently, in London, more than 15,000 students rallied to protest against expensive tuition fees. It was a peaceful, organized and generally serious demonstration — which the media just ignored.
It is inexcusable, though, that our generation should submit to such treatment, that we should allow ourselves to be indoctrinated into apathy. There are still battles to be fought for justice, equality and political accountability. All of us have different passions and it is of paramount importance that we educate ourselves to stand up for what we believe in — and to resist what we find objectionable.

Unless we learn, now, to band together and hold up a dignified middle finger to the establishment that would like to convince us of our collective impotence, we will someday find injustice being meted out not to others but to us — and by then it will be too late.

They didn’t know, at first, how many were dead; estimates ran up to three digits. There were no commercials, I recall. And the images didn’t change much, as they obviously couldn’t get cameras inside the building. As the afternoon trickled on they began interviewing survivors, weeping schoolgirls, football players still trying to be macho through their residual terror.

Fifteen dead, including the two kamikaze killers whose innocent-seeming faces would stare posthumously from the covers of every major newsmagazine in the country. Faces whose secrets the world would try, too late, to understand. Blame TV, heavy metal, black trench coats, video games, lax parenting or poor social skills. Invoke the word “evil,” so long out of fashion until now.

Whatever you do, though, don’t blame guns. Guns don’t kill people, people do. To take the guns out of peoples’ hands, to prevent mere children from purchasing weapons, that would be an unreasonable — unconstitutional — infringement of civil liberties.

Americans are not the only ones, though, who have seen hell break out in their schoolyards. Just three years before Columbine, in the little Scottish town of Dunblane, Thomas Hamilton walked into a primary school with four handguns and hundreds of rounds of ammunition. Minutes later, 16 kindergarteners and their teacher were dead. Hamilton committed suicide.

Stunned, shattered, the nation and the government were determined it would never happen again. The parents of the murdered children threw themselves into a campaign to ban handguns. “Impossible,” an American would say. “Unfair!” cried the sport-shooting lobby in Britain. Yet the government implemented a ban on high-caliber handguns, resulting in more than 100,000 weapons being surrendered to the authorities. By early 1998, the ban was extended to all .22-caliber and lower handguns as well.

This legislation was in no way universally popular. Shooting aficionados were outraged at having to give up their weapons. Gun enthusiasts rightly protested that they — the responsible sportsmen — were not the problem. But in the end, despite their feeling that injustice had been served, they handed over their guns and got on with it.

Nearly four years have passed since Dunblane and nearly two since the legislation banning handguns came into effect. The shooting fans are still grumbling, yes. There is still gun-related crime, yes. However, there has been no second Dunblane.

Will we be able to say the same thing four years after Columbine? I doubt it.

Because it wasn’t just Columbine. It was Jonesboro, Ark.; Springfield, Ore.; West Paducah, Ky.; Pearl, Miss. A trail of blood and anguish, the children with guns in their hands and blank eyes. And every time it happened we were horrified, the images running together in a montage of huddled parents, weeping children, stone-faced politicians.

Those were just the disasters epic enough in proportion to become catch phrases. In mild-mannered Portland, Ore., a boy was stopped outside my brother’s school, the trunk of his car full of guns. In South Dakota, my friend’s sister got the day off of school because of a bomb threat. Multiply that by thousands, the number of incidents that border on the knife-edge between near miss and front-page horror show.

In Britain there is one name — Dunblane — and there was one reaction: banning handguns. A knee-jerk reaction, some have said, but since then no one has turned on the BBC evening news and seen blood-soaked children fleeing out of schools — unless they were watching the Columbine coverage, of course.

Like it or not, the ban seems to have worked, and it stands as a rebuke to America’s selfish unwillingness to make radical change in the face of tragic persuasion.

In 1999 I took issue with Britney Spears. I didn’t like …Baby One More Time and I wrote a column to say so. Some of my views have changed (I like Britney, love the record) and some haven’t (I still object to self-objectification for male titillation). Read on. 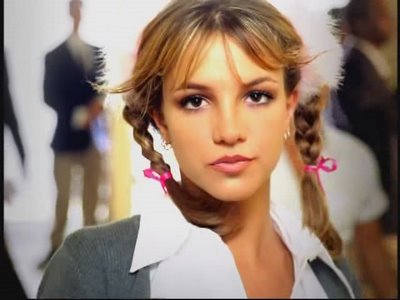 Once upon a time girls hummed along to the catchy strains of Gloria Gaynor’s I Will Survive. Or joined Aretha, singing about R-E-S-P-E-C-T.

Turn on the radio, or television, these days and you’ll hear young women singing a very different tune. In fact, chances are if you listen to any pop music station for more than an hour, your ears will be tormented by the grating Britney Spears single, …Baby One More Time.

Thanks to Google I’ve just stumbled across a column I wrote for the Daily Pennsylvanian some eight years ago. I was their foreign correspondent for a term, while studying at London’s King’s College. An excruciating tutorial there formed the basis for this column.

All I could think was that I’ll never be able to open my mouth in this class again. He was ruining it for me, ruining everything with his grating tone, his blatant rudeness, the patronizing way he kept interrupting other students to correct their opinions. If only he was German or French or Dutch or Spanish, I would have been all right. But he was American. As much as I wanted to light into him, my tongue was tied by the sudden awareness that my voice and accent would betray me in an instant. It wouldn’t matter what I said, my accent would stamp me just as quickly as his had identified him — and equate us beyond my power of control.

Until that mortifying hour in my critical theory class, surrounded by British students who were — justifiably — looking daggers at this specimen of Americana, I hadn’t realized to what extent language shapes and projects our identity.