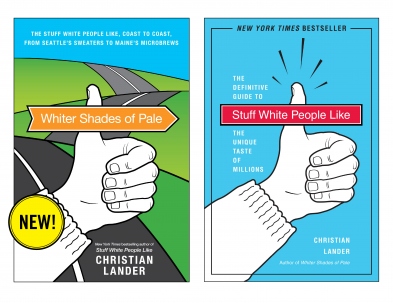 Let’s start at the beginning: what’s your background, and how, specifically, did Stuff White People Like come into being?
Well, I’m white. I grew up in Toronto, Canada. Went to school in Montreal [where I] studied English and history. Went to grad school for four years then moved to LA and started working in advertising. One day was having a conversation over IM with my friend Myles and he told me he didn’t trust any white person who didn’t watch The Wire and we started guessing what white people were doing instead of watching The Wire and then it was blog time. That was it. I just started writing and it caught fire.
Did you have any idea it was going to catch fire?
No idea at all. I wrote to entertain my friends.
Were you already into blogging?
I was doing some goofy stuff on the web, I was working and wanted a comedy project on the side. Writing funny stuff is my favorite thing in the world.
At what point did you think ‘hey, maybe this is more than just entertaining my mates’?
The day it crossed 60,000 hits. The day before it was 30,000 and I thought: “ok, a one day thing, cool,” but it grew the next day. I thought, “whoa, can’t get any bigger than this,” and it did.
How long did that take?
Four weeks.
Damn! That must have come as a surprise.
Very much. Literally all my dreams came true by accident
What changed when suddenly you had this massive readership?
I got offered a book deal. That was really it.
How did that come about?
A number of agents contacted me. I chose one and prepared a book proposal like any other author, and a publisher bought it.
Were the agents who contacted you “regular book” agents or special “blog hunting” agents?
They were regular literary agents.
In the States scouting blogs is pretty standard now?
Yes, it’s definitely standard. Blogs, Twitter, anywhere with a unique voice and a buzz.
Once you got an agent, did your approach to the blog change?
I wrote the same way, I just saved it for the book and updated the blog when I felt like I had a great idea.
It was important to have distinct content for the book?
Yes. We had new things. Some things I needed a designer and an editor to get done.
Were you still doing the day job?
I quit the day job when I got the book deal. The only challenge was dealing with people who hated me. I wasn’t used to being a public figure.
How did you reconcile yourself to that?
Ultimately you have to realize that no one has 100% popularity. As a writer, nothing is worse than apathy, so to have people hate you is a good thing. It means you’re doing something right.
Do you write differently knowing you’ll be face to face with your readers on book tours?
Not at all. I write what I think is funny and relevant. I thinkwhen you try to write to an audience you end up patronizing them. I write what I find funny, and I’m very lucky my sense of humor is shared by others.
Who or what are your literary inspirations?
David Sedaris. [And] the most underrated writers on the planet – the guys at the Onion. Sam Lipsyte. National Lampoon. The Simpsons. The Kids in the Hall. Monty Python.
You’ve done two books now — do you have any more planned?
No. I think it’s a miracle I’ve been able to write two. I have no idea what I’d do for a third. I don’t have the talent to write fiction.
Would you advise a wannabe author to start with a blog?
It depends what kind of author you want to be. If you’re looking to write fiction, not at all. No one will read it. But if you hope to write a cookbook, or a design book, or something where people will follow your blog, sure. But trying to start a blog to turn it into a book is very hard – most of the popular ones are accidents. [Don’t] write a blog to get a book deal. Write a blog to keep you writing. The expectation that it will become a book will just lead to frustration and heartache.
In your experience is there still a clear divide between the trad-publishing world (e.g. fiction) and blog-world?
Not really. In both cases editors and agents are looking for talent and great ideas. Publishing is a business, they need to sell books to an audience that will buy them. If you’re a writer struggling to get published don’t think it’s because of a lack of talent, to be a successful writer you have to be talented , sure, but more importantly you have to write something that people want to read, and knowing what that is can be almost impossible. I mean, who would have thought so many people want to read about vampires?

Every once in a while someone hits up one of my blogs with a comment so fantastically stupid I sit and cackle helplessly (and then email it to my friends). Some chap happened across a few comments about sexism and sex appeal in Quantum of Solace and grabbed the wrong end of the stick with both sweaty palms.

My not-quite-coherent interlocutor is under the mistaken impression that my feminism is merely a badly sublimated urge to be swept off my feet into a Mills & Boone romance. I think he thinks I want this. Actually…

If he were crying...