Never thought I’d find myself quoting an A-list Hollywood actress for her wisdom but hey, life is full of surprises. Salma Hayek’s advice to “ambitious women” is too brilliant to not share. 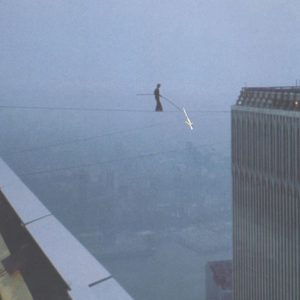 On a time-killing impulse I went to London’s legendary Prince Charles Cinema yesterday afternoon (my flight home wasn’t till five PM), bought a £10 annual membership and a ticket to the only thing showing between half-one and three: Man On Wire.

Not as grammatically challenged as it sounds, the documentary takes its title from report filed by baffled NYPD officials after they arrested puckish artiste Philippe Petit when he finally stepped off the cable he and an audacious band of companions had illegally strung between the two World Trade Center towers.

“I observed the tightrope ‘dancer’ — because you couldn’t call him a ‘walker'” a sturdy-joweled cop tells reporters in the aftermath. It was as close as any American commentator got to describing what it was Petit was doing 104 floors above the pavements of New York.

Petit himself, a passionate, charismatic, voluble character, gives the most Gallic of shrugs and says words to the effect: I had been walking in heaven and all the Americans could ask was ‘why?’ There was no ‘why’.

It was a grand gesture, life as objet d’art. The documentary interviews, at length, everyone immediately involved in the unforgettable event: Petit, his then girlfriend Annie, his best friends Jean Louis and Jean Francoise, Pete (Australian) and John (American) who helped rig the wire, as well as Barry the ‘inside man’ and Alan and David, all Americans who helped the little gang of French who they – more than 30 years later – still clearly think a bit mad.

The contrast between the French and American Weltanschauung is profound and powerfully affecting. Petit describes his first encounter with the two towers – in an artist’s rendering in a magazine. I had found my dream, he says. That his dream was impossible, life-threatening, ludicrous and (most confusingly for their reluctant American helpers) non-profitable was of absolutely no concern to his friends and lover. Jean Louis, handsome and articulate, breaks down at the end of the film — apparently their friendship didn’t survive the supreme emotional peak of the experience. Annie, possessed of vibrant green eyes, also weeps describing the moment of Philippe’s triumph. She later says, without regret: our relationship ended that day. Good-humoured Jean Francoise, who was deported for his part in the adventure, is equally non-judgemental. Each sacrificed for their friend’s dream yet there is no regret, no obligation, much less anger or bitterness.

David and Alan, the Americans who were briefly involved, couldn’t be more different. Their incomprehension of the whole affair is stamped across their faces. David fled halfway through helping them smuggle supplies into the towers, ending his role in the story early. Alan stuck it out a little longer, but eventually abandoned Jean Louis on the rooftop because he thought it was ‘impossible’. What they saw when Petit lounged gracefully on the wire, 450 metres in the air, it wasn’t art or communion with the heavens — just some daft frog showing off. Watching them, you suspect that if Petit had told them he was trying to get in the Guinness Book of World Records, or that he were being sponsored by a major corporation they would have ‘got it’. If Petit had gone up and waved a French flag they might have understood. Exploration without conquest remains too alien a concept for literal American minds.

Man On Wire ends with the now-60-year-old Petit walking with calm, rapt concentration along a wire. His final words incite rebellion, he says: don’t rest on success, live every day as a challenge. Not against rules outside, necessarily, but against fears inside.

Last Exit To Brooklyn is set during the Korean War, in the early 1950s. The first characters you see are a trio of soldiers, cock-of-the-walking their way back to barracks after a night out. For a few, deceptive seconds this might be a war film, in the conventional sense. Then the real soldiers, fighting the real war, bowl on screen: a gang of roughneck wops, spoiling for action. A brief, brutal, beautifully choreographed beating later you’re in their world, to stay.

Based on the novel by Hubert Selby (who also wrote Requiem For A Dream), the film is a raw, artful, unsparing look at raggle taggle Brooklyn life. The endless parade of soldiers who straggle through the film getting mugged, propositioned, beaten up, or otherwise damaged in their exchanges on this lawless patch are stand ins for the audience – sucked into a world that is short on narrative arc and long on impulse, where the only constant is violence. At the centre of this universe of quicksand is Tralala (Leigh), a mouthy hooker with a finely tuned survival instinct, and her occasional partners in crime, Vinnie (Dobson) and Sal (Stephen Baldwin). Their buddy, Harry (Lang), is a shop steward, and head of the strike office, making free with his union expense account as the community struggles through a long strike against the bosses of the local metalworks.

Though a stunningly filmed late-night clash between police and strikers provides the visual epicentre of the film, social issues never eclipse the individual. Rather, the big picture stuff (war, labour disputes, family relationships) is backdrop to the intensely felt experiences of the characters. In sharp contrast to films that look back at the ‘50s through a spyglass of modern mores, Last Exit is perfectly self-absorbed. When shop boss Harry falls hard for a fey, selfish little queen called Regina (Bernard Zette) it would be easy for the film to make a statement about contemporary sexuality, or life in the closet. But it doesn’t, because the point is not what we think of Harry, but how he feels. Instead of glib commentary, there is real pathos. A theme that is repeated in the subplot of transvestite Georgette (Alexis Arquette) and her unrequited love for good-looking thug Vinnie (ringleader of the tormenters in the opening scene). Any kind of vulnerability can be fatal in Last Exit’s testosterone-fuelled landscape, especially for dainty queens, which makes Georgette’s flirtation watch-through-fingers stuff.

Frankly, it’s a miserable film. Yet so lovingly shot and acted you can’t help being drawn in. These are characters so small, sharp, closed and ugly they wouldn’t ever get an airing elsewhere, but the strong cast (including an excellent young Sam Rockwell) render them painfully alive. Leigh, in particular, pulls off an extraordinarily difficult role with power and panache. They elicit compassion when they shouldn’t and they provoke empathy at the unlikeliest moments. And while they’re trapped, you can leave, which gives this film its lingering, bittersweet edge.